This was an eye opening meeting.

Councillors (County, Districts and Parishes) mostly made up the audience but with the addition of some members of the 'ordinary' public. Being a Labour councillor in Buckinghamshire is a bit like being a teetotaller at the Munich beer festival: you feel just a tad out of place. I was certainly made to feel that way during parts of yesterday evening...

The published agenda said that each candidate would have 5 minutes to address us and then there would be 15 minutes for questioning from the floor. I was not alone, I think, in expecting a fairly short but frustrating meeting until it became clear that we would have each candidate at a time followed by questions just to each one. The meeting went from 4.30 to around 6.45pm.

The candidates came in alphabetical order which meant that Patience Tayo Awe was on first. (The whole meeting was webcast and will be stored in their library, I believe. Pretty soon, I would imagine you will be able to see her presentation and response to questions from the floor on the Buckinghamshire County Council website here - as well as all the others.) I had picked up on her interest in the riots of last year and so I asked her this question:


What views do you have about the riots which happened in London and parts of Thames Valley in the Summer of 2011? As PCC what action would you take to prevent such riots happening on our streets again?

(If you click the link above and play the tape from 12"37' onwards you will hear my question and her response) She particularly thanked me for question. She then launched into a list of allegations and dramatic conclusions about the causes of the riots that prompted the Chair of the proceedings to remove his glasses give her what can only be described as a double take. There were similar reactions on the floor.

Paul Scoins, the political reporter from BBC Three Counties Radio tweeted back and forth with me: 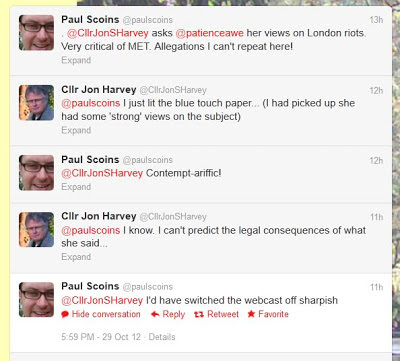 As Paul indicated, I too would not wish to repeat her statements here, but I suspect that these will be of interest to a number of people in London and perhaps more widely. Assuming the webcast is fully archived, you will be able to listen to and watch what she said before too long...

The meeting moved on in alphabetical order. Next up was Barry Cooper the UKIP candidate. He was closely questioned on whether, if elected, he would give up his role in the family business (which seems to involve about six members of his family, if I heard correctly). He said that he would dedicate himself 100% to the job of PCC. I asked him this question:


If elected, will you wish to use the car and chauffeur that two candidates have sought to arrange for the PCC in advance? If so, would you wish to extend this facility to all officers and staff with a TVP wide brief based in the Kidlington HQ?

He said that he would to the first question as it represented vfm for the taxpayer as he would be able to work in the back of the car. He wasn't sure about the second question but would look into it.

Don't worry, I am not going to go through the whole meeting here, but I had to mention this question. After Barry had finished, the Chair of meeting then repeated his request that questions from the floor be polite and (looking in my direction) said there should be no "innuendo or slurrs". As you might expect, I took slight exception to this and later sought to read out an extract of the email I had received from the Police Authority Chief Executive on the subject (see below) where he said very clearly:


Two candidates (including Anthony Stansfeld) did express a desire for some form of transport facility to enable them to effectively cover the Thames Valley force area.

I pointed our therefore, there were only facts behind my question, no "innuendo or slurrs".

Anyway... time proceeded and soon it was Anthony Stansfeld's turn. A Labour colleague, Cllr Michael Beall from Aylesbury, asked him about the inconsistent information he has shared about his commercial interests. Cllr Stansfeld attempted to bat this away saying that he had recorded two companies he was a non-executive Chairman of even though he did not have to... He then turned his attention to me and accused me of making inquiries about all of his expense claims as well, and this was all getting rather excessive and tedious now. The audience rippled with murmuring approving sounds. One person (a councillor?) even turned around and gave me a sneering look and a 'thumbs down'.

Enough said. I will just say that I have not been inquiring into Cllr Stansfeld's expenses (but I won't be contacting my lawyers about this accusation). But, assuming that Cllr Stansfeld was correct (and not just engaging in flim flam) I wonder who has been? Ho hum.

I would record that Tim did a fine job and answered the questions put to him well.

Finally, a friend sitting next to me, who is not deeply embedded in this business but had come along out of curiosity and wishing to be an informed voter turned to me at the end and said something like:


The Conservative candidate thinks he has it in the bag, doesn't he?

I could only smile ruefully and agree with her. But I wonder...

UPDATE: The case of the missing sentence

Just got around to reading the CV from Cllr Stansfeld that was included in the pack. I note that his CV on the web which includes the sentence "He is currently Chairman of a small company that has interests in water systems for agriculture and energy recovery systems for industry" was curiously absent from the CV circulated last night. Other than that (but I have not checked it word for word) the two CVs seems the same.

One usually constructs a CV to make oneself sound good. Does this sentence not sound so good any more, Cllr Stansfeld?
Posted by Jon Harvey at Tuesday, October 30, 2012