During the hustings last night, I asked a question of the panel:

Most of you have written and all of you have talked this evening about your leadership experience at running a business, as being part of your bid to be recognised at the best PCC candidate. Please will you give specific names and details of all the businesses you have led in recent years, together with details of where the voting public can find out more about the actual financial performance of these businesses so that we can assess your leadership credentials.

The answers were illuminating. Rather than try to record what people said in note or verbatim form, I have uploaded a file to two places so that you can hear the response from the panel:
It would appear that my research into the commercial interests of Cllr Stansfeld has upset him somewhat. You may have some sympathies with him and think that his business is none of my business (etc.) Please allow me to state again why I have been doing this: 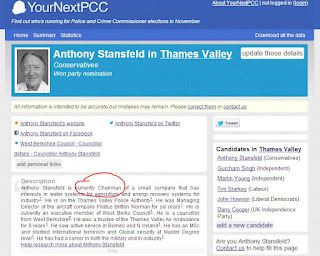 Cllr Stansfeld can clear all this confusion up very easily. I would be happy to print whatever statement he wishes to make. All he has to do to state clearly the name and address of the company he currently chairs and which is referred to in his CV. (He may then have to adjust various registers of interest as well, I don't know...) Indeed, he may be chairman of more than one since his TVPA record currently refers to ELS and the WBC one refers to Fidas. An explanation of why these two records differ would be helpful too.

I am not interested in going back many years. I am interested in recent times. I am not greatly interested in Cllr Stansfeld's exploits in Borneo (worthy though I am sure they were) or his leadership of Pilatus Britten Norman which, according to his LinkedIn profile, he left 16 years ago. Those two roles (among others in his earlier years) were very different to the PCC role, I would contend. (The PCC is role is much more about influence and leadership than it is about management and command.)

It seems to me that Cllr Stansfeld thinks it is only me that is curious about his credentials and interests. I can assure him that is not the case if the people who have contacted me and others about these matters is any indication.

And personally, I really want to get onto policy and just what Cllr Stansfeld is promising the public of Thames Valley if he becomes PCC. His website is still pretty well void of all policy. I will be more than happy to move on from my "very unattractive" digging into his commercial interests when all is clear.