The Daily Mail have gone for jugular again this morning: 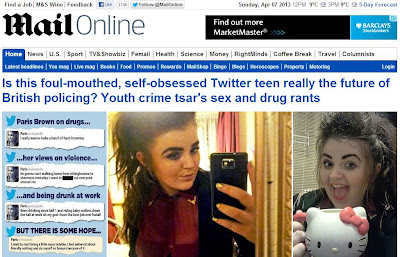 Increasingly the Daily Mail / Mail on Sunday can be relied upon to help the citizens of Oceania/UK express their two minutes of hate everyday. They did this earlier in the week by linking the tragic manslaughter of six small children to almost everyone who claims benefits in this country. And a few months ago, their columnist Richard Littlejohn decided to take a potshot at primary school teacher who had decided to change gender. The teacher, Lucy Meadows, committed suicide not long after. Remember, this is the same Mr Littlejohn who used the occasion of two children and their auntie dying on Christmas day to have a rant about how long the emergency services close motorways when there are accidents in which people have been hurt and possible scenes of crime to investigate.

But this column is not about the Daily Mail or its readers (and I fear to read the comments that have been posted under the article above). Instead I want to focus on Paris and the role to which she has just been appointed. Here are some facts:
I understand that her personal twitter account which featured the intemperate tweets has now been deleted.
I understand that there are many people out there who feel let down, who feel the image of policing has been tarnished and indeed that the reputation of young people themselves has not been helped.

But I urge people to cut her a bit of slack (to repeat again: she is just 17), let her learn from this and then give her a chance (with support from Ann and others in the Kent PCC's office) to do her job - and do it well.

UPDATE: "I do regret it" Paris talks about her tweets to Channel 4 News