They seek him here...

Here are some words from the Conservative Manifesto of 2010 on police and crime commissioners:


Policing relies on consent. People want to know that the police are listening to them, and the police want to be able to focus on community priorities, not ticking boxes. We will replace the existing, invisible and unaccountable police authorities and make the police accountable to a directly-elected individual who will set policing priorities for local communities. They will be responsible for setting the budget and the strategy for local police forces, with the police retaining their operational independence. Giving people democratic control over policing priorities is a huge step forward in the empowerment of local communities, and we will go further by giving people the information they need to challenge their neighbourhood police teams to cut crime. (Thanks to the 2020UK blog for this extract)

So what is happening here in Thames Valley? First, out of curiosity, I put in thames valley police crime commissioner news into a google search - this is what came up: 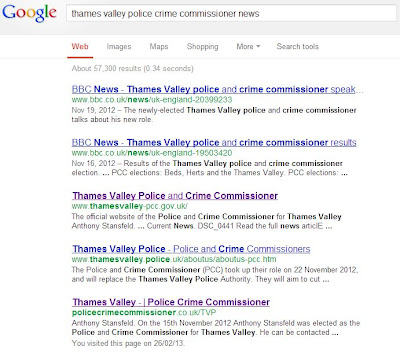 Not much current stuff there. Compare this to (say) Northamptonshire (Conservative) or West Midlands (Labour): 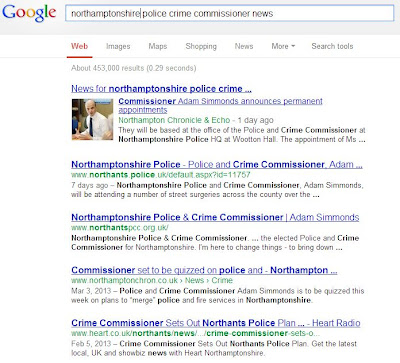 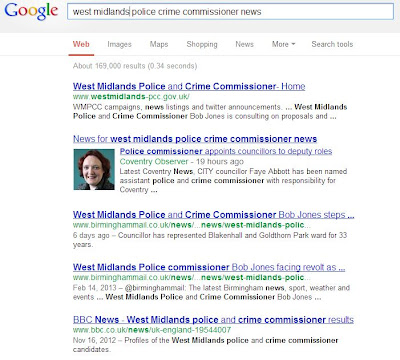 Not all the reports in these two other searches are positive of course, but at least the PCCs are visible and raising their profile.

Perhaps the clue can found in how much Anthony Stansfeld is getting out and about. I have blogged about this before (here and here) and I have been tracking down, just who he met between coming into office (22/11/12) and the moment he uploaded his draft plan. It took a while to get the information I was seeking, but here is the list I was sent a few days ago. (I have added categories):

People within the police service

Now I am hoping that the PCC will now get out and meet more people, especially community groups and ordinary members of the public (this is a public office, after all). I will be asking the same question in a few months time. I hope I will be able to report a wider set of people.