If you can't get cynical as you get older, what's the point?

Yesterday, my wife and I shared a glorious walk through the leaves up at Stowe. We are fortunate to live within walking distance of the place, although we usually drive there. 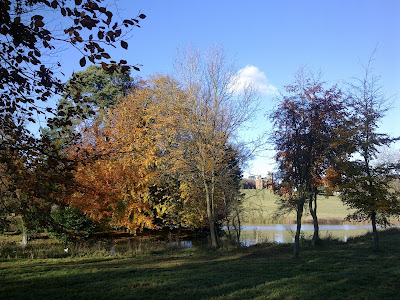 After walking for nearly an hour we felt justified in returning to enjoy a free cream tea for two. We won this in a raffle on Friday at the opening reception to a local art show hosted by Buckingham Art for All. At the Stowe refectory, we ended up sitting next to a couple, a little older than us and got into conversation with them. It ended with the man saying to me that it was good to meet another Conservative... and we bade them farewell.

How did we get to that point? Allow me to reflect on the conversation which included me saying the title of this post and the other couple laughing.

The other man did most of the talking which centred on his abhorrence of rules and regulations (and consequently the EU) and how things were so much better when corporal punishment was liberally applied in schools. And how he can't bear this idea of Police & Crime Commissioners. He was frankly amazed that his own party had brought it in and was considering voting UKIP if he voted at all. I said (and I think this is where he may have got the impression I was a Tory) that I understood and that I think a lot of Conservatives are thinking of voting UKIP. I also suggested that perhaps one day, care of superior virtual technology, one will be able to jump into a black & white movie from the fifties (à la Mary Poppins) and spend two weeks having a retro experience. Both he and I wife thought that would be a great idea. I quite fancy it myself although I think my chosen era would be late sixties...

But it struck me that what underlay his rants against the modern day world and his cynical dismissal of what governments of all hues do, was a shattered dream. I think he holds onto a dream, which perhaps was once even a reality for him, of a Britain of gentle cricket, warm beer and courteous respect. A kinder, less frenetic, less tortured world.

I suspect that like me, he would raise his eyebrows with disbelief at the increasing numbers of technical standards that people have to follow - ISO 9000 this and COSHH regulation that and so forth. He might even despair of a world which seems intolerant of mistakes or in which people are cautious about what they know and therefore do not wish to jump to easy conclusions.

All this brings me round to say that I believe the most ardent cynics are also the most ardent dreamers too. I have vented my cynical spleen about PCCs mostly through my 'Diary of a Secret PCC' blogs. But these blogs are merely camouflage for a deep despair that I feel towards the whole concept.

I want a police service and set of crime prevention agencies which fair buzz with a focus on really improving the safety of our communities. I want these services to vibrate with the wishes, needs, hopes and dreams of the people they serve so that the right priorities are selected. I also earnestly hope that one day crime fighting and crime prevention will resonate with evidence based practice like the health service does nowadays (although it still has a long way to go).

Police & Crime Commissioners are not the answer. I don't think there are many people who do think they are the answer other than a few policy wonks in a couple of right wing 'think tanks'.

But as I have said on many occasions before.... we are saddled with this daft experiment. All I can hope is that we end up with PCCs who are cynical dreamers and who will use every molecule of their being to ensure that they do no harm. With a fair wind, they might even do some good before the next Labour Government puts in place a wiser model of governance.
Posted by Jon Harvey at Monday, November 12, 2012