Today is the day after the day after the local elections. I just googled ‘turnout news’ and a whole bunch of stories came up. Here are just three:
I wondered if there was a national trend similar to what happened here in Buckinghamshire. It would seem there was. Here is my local county council elections the turnout was 30.3%. Four years ago it was 40.1%.

That is a drop of 10 points! 25% fewer people voted. I think that is significant. Really significant.

Up and down the country, there are many thousands of local and national politicians & activists (of all hues) getting on with getting on: using their spare time to help make their communities good places to live. Most of this work is unsung, often tedious and, I would argue, part of the real fabric of British society. Long may it continue.

But what is happening when in the course of just a few years, the numbers of people bothering to vote has gone down from 4 to 3 in 10? I know there is a long term trend downwards in voting numbers, but this drop seems to be a real step change. It coincides, of course, with the (irresistible?) rise of UKIP who appear to have cornered the “ordinary bloke down the pub who is fed up with all these fancy politicians feathering their own nest” section of the electorate.

This is a real challenge for politicians both local and national. It is not often I say this but I think Dan Hannen is partly right when he said in his blog last night:


UKIP is a reaction to the lack of authenticity amongst the smug, politics-as-usual elite who rule Westminster. If UKIP are the insurgency, we need a counter insurgency. Attacking UKIP as clowns, or sneering because their fiscal plans might not add up, will not do

So we have a challenge. Just how should ‘main stream’ politicians and activists react? The short answer to that is I am not sure. It is difficult, especially when some politicians still seem to insist upon doing things that play into the hands of the cynics. (Sub editors the length and breadth of this country just love the “another politician messes up” or “here’s another politician with their snout in the trough” stories. They make such good copy.) 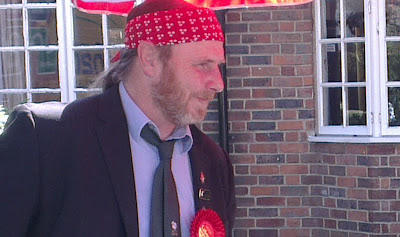 But I think part of the solution happened here in Buckingham on Thursday. Against most national trends, a Labour county councillor was elected. Robin Stuchbury is going to be the only Labour councillor in Buckinghamshire. This feat was noted by Tom Watson, the Labour Party’s national campaign coordinator when he wrote last night:


Let’s be honest, we were never going to take control of many of the County Councils holding elections. So step forward Robin Stuchbury – the first Labour councillor elected in Buckinghamshire since 2005. I’ve never met you Robin but I could have kissed you this afternoon.

I am proud to say that Robin is a good friend and political colleague of mine. As party agent, I coordinated his and all the other campaigns in the Buckingham constituency area. We worked hard and shrewdly, and Robin was elected. His success, however, comes down to years of good local political work by him, the fact that he always speaks his mind and that he is (and is seen to be) completely loyal to the people of Buckingham. Robin became a town councillor in 1999 and fourteen years later, Buckingham rewarded him by choosing him to be their county councillor. I met one woman in the street a couple of nights ago who said to me


I am a right wing Conservative, but Robin has my vote because he has done more for this town than anyone else

That is a local politics. And let’s be clear, Robin does not hide his political colours behind a mask of independence (and nor do any of the other 7 Labour town councillors in Buckingham). He just works hard and people know it. He is a ‘Ronseal’ local councillor…

This is not the whole answer to the problem of declining electoral turnout (digital voting would be a start too), but I think we need many more honest, hardworking mavericks like Robin.

There are many already, but we need even more!
Posted by Jon Harvey at Saturday, May 04, 2013