There has been much talk of 'British Values' in recent hours since publication of the Ofsted inspection reports into the Birmingham schools at the centre of 'Trojan Horse' controversy. Tempting though it is, I am not going to wade into the debate about any 'Islamification' of schools, what Islamophobia is (or isn't) or even whether Ofsted ever really know what is really happening in the schools they visit. I will leave all that to the legions of trolls, experts, hacks and others currently marching across the social media plains.

Instead, I would like to focus on the plans for schools to promote British values which are likely to have the "overwhelming support" of people in the UK the prime minister has said. (See the BBC article here.) The piece goes onto to report:


Speaking in Sweden after a mini-summit with other EU leaders, Mr Cameron said: "I would say freedom, tolerance, respect for the rule of law, belief in personal and social responsibility and respect for British institutions - those are the sorts of things that I would hope would be inculcated into the curriculum in any school in Britain whether it was a private school, state school, faith-based school, free school, academy or anything else."

I had tried Googling 'British Values' this morning and searching on Gov.UK site but found very little. Here is what the government site came up with on page one: 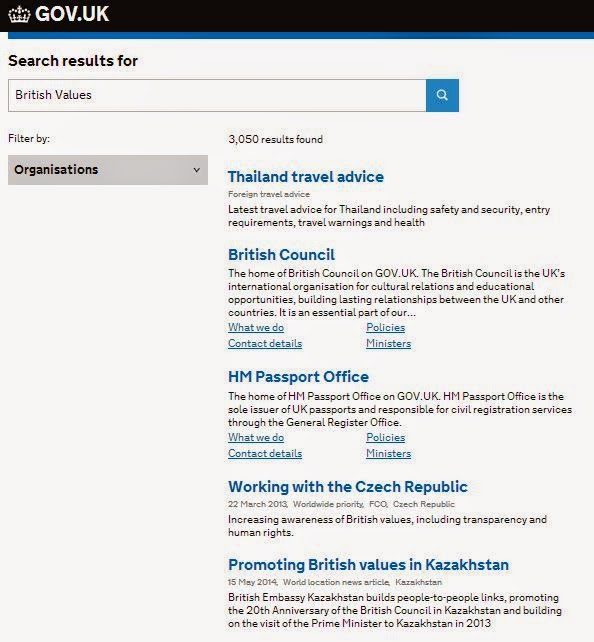 Perhaps they will soon have a page linking to Mr Cameron's statement in the near future. But we have a starter for ten on what constitutes "British Values" from the PM. Here is my commentary:

So it is a start Mr Cameron, but the list is not yet complete. I would also add the following "British Values":

I am sure there is more. Let's have a national debate about what British Values really are! All contributions welcome...