Force performance: What is the Stansfeld effect?

Cllr Anthony Stansfeld is making much of his Chairmanship of Thames Valley Police Authority's Performance Review Committee. See his website for example where he says: 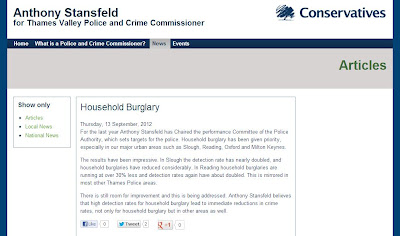 
He took over as Chairman of the Performance Committee of the Thames Valley Police last year, during this period the overall crime rate has dropped by 15%, the greatest drop of any Police Force in England and Wales. He has, in conjunction with his Committee, set the exacting targets the Police have to achieve over next year. He concentrated his efforts on reducing rural crime, and improving household burglary detection rates, especially in Slough and Reading, neither of which has been up to standard in the past.

And at the hustings on Monday night he said (if my listening back to the tape is accurate) "At last, a year and a half ago, we put a proper performance committee in to get a grip of this [performance], I chaired that committee". (You can listen to the full extract here on audioboo and you can draw your own conclusions.)

I would say that he wishes us to draw a clear conclusion: he took over in April last year and, almost single handedly, drove up performance. It would be impressive if it were true.

Firstly, the performance review committee meets every few months while all the while police officers and staff are working full time to tackle burglary and other crimes on their patch. I would contend that the impact of a police authority committee is very limited. What do you think?

But perhaps more interestingly, Thames Valley Police Authority published yesterday on its website an agenda with papers of the 9/10/12 meeting of this committee. You can download it here and go to page 45 which is the official transition handover report from TVPA to PCC governance for this committee.

In this report, it says very clearly:


The Authority can clearly demonstrate how, over the past three years, it has used its performance management regime to drive up corporate performance in Thames Valley Police.... the Authority is also quick to recognise that the Force – through the leadership and direction of the current Deputy Chief Constable (DCC) and Head of Force Performance – have consistently responded to the Authority’s challenges [my added emphasis]


At a Police Authority meeting in July 2009 the Authority’s then Lead Member for Performance, supported by other members, identified areas of concern over the Force’s performance in a number of key crime reduction and detection areas in Thames Valley... By the end of August 2009, the Force had responded positively to the Authority in number of ways. [again my added emphasis]


In the spring of 2010, the Authority played a pivotal role in bringing forward a Force initiative, ‘Project Morse’, which had originally been planned for later that summer. Morse was designed to improve the Force’s approach to investigating offences or, put simply, ‘detecting not just the detections’. Given the Authority’s previous concerns, this sustained approach was instrumental in achieving some challenging detection targets by the end of the following year in March 2011. [again my added emphasis]

You can read all the report for yourself.

This is not to say that the Performance Review Committee has had no impact in the last 18 months. But the implication of the official TVPA report is clear, the road to improvement began at least 3 years ago, not just since 18 months ago when Cllr Stansfeld got 'a grip' of matters by starting to chair a new committee.

Judge for yourself: what impact has Cllr Stansfeld actually had on Thames Valley Police performance?
Posted by Jon Harvey at Wednesday, October 10, 2012