Prompted by Ros Baston’s tweet Am officially bored of fashion for bashing PCC cands simply because they've been politically active. Get back to the issues, guys (referenced by Jon Collins, Deputy Director of the Police Foundation in his article this morning) and another ongoing debate on twitter about the important role of PCCs in crime prevention (not just reduction) – I thought I would dig out the impressive work of Professor Paul Ekblom.

Professor Ekblom can be found residing here: http://www.designagainstcrime.com/ where he promotes his work to reduce and prevent crime. I first came across his work when he was at the Home Office and I remain hugely impressed by his “Conjunction of Criminal Opportunity” model which I think provokes much good thought leading towards actions to be taken to prevent and reduce crime.

Using his model as a prompt, there is much that the best PCCs will be able to do to reduce and prevent crime through the powers that they will have and the leadership influence they will bring:
This is just a sample of what Ekblom’s model can do to inform and support what PCCs can and must do to prevent and reduce crime. The trick will be prioritising the range of possibilities so that each PCC uses their time and resources to maximum effect.

What would be your priorities? 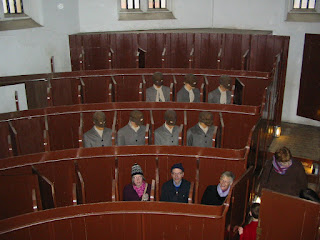 (If you visit Lincoln, the old prison is well worth exploring for its fascinating focus on air conditionning and keeping prisoners apart from each other - the prison is more or less preserved in aspic..)