So, the Conservative Parties in Thames Valley have finally selected their candidate to fight the election to become the first Police & Crime Commissioner of our local police service. He is one Councillor Anthony Stansfeld (you can find his biography here)

He has spent most of career either in the Army or in defence industry working with the Army. He is now “Chairman of a small company that has interests in water systems for agriculture and energy recovery systems for industry”. He also chaired the “Performance Committee of the Thames Valley Police last year, during this period the overall crime rate has dropped by 15%, the greatest drop of any Police Force in England and Wales”.

I assume he will be resigning from the Police Authority soon.

But of what small company is Cllr Stansfeld Chairman?

His West Berkshire register of interests says he is “Chairman of FIDAS” but does not give an address for this company. 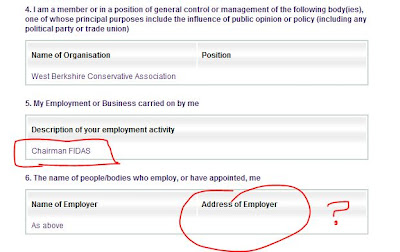 I have checked out Companies House records but I have drawn a blank.

His LinkedIn profile lists him as Chairman of ‘Prescience Switzerland’ in Reading, a bio technology business. 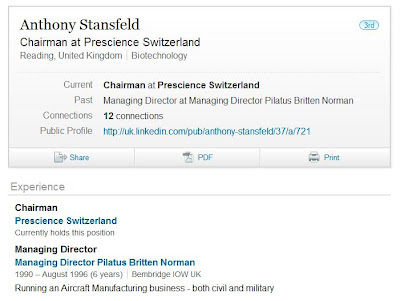 As far as I can discover, this company has details here but Anthony Stansfeld is not listed as Chairman. 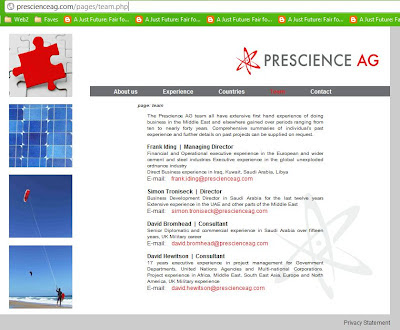 However making the link between him and Frank Iding, it would seem that they were both Directors of company called European Land Solutions Ltd and terminated their positions (along with David Hewitson) on 15 July 2008. This company is now dissolved but was previously called ‘European Landmine Solutions Ltd’. Janes list this company’s activities as “Detection and clearance of mines, marking and monitoring, mine risk education, surveys and training”

So I am puzzled: of what company is Cllr Stansfeld currently Chairman?

If it is ‘FIDAS’, may we have an address or website? I will have other questions to explore, but perhaps he or his spokesperson might like to come forward with this information soon. And maybe Cllr Stansfeld might like to expand on his statement in the West Berkshire register of interests.

I have just written to West Berkshire Council:


Hallo
I have been looking at the Register of Interests of Cllr Stansfeld. Under the section “5. My Employment or Business carried on by me”, he records that he is “Chairman of FIDAS”. However no address (postal, web or otherwise) is given for this organisation – either here or in the box underneath (6. The name of people/bodies who employ, or have appointed, me) where he simply says “ditto” and the address box is left blank. I have been unable to find a record of FIDAS anywhere.
As I assume that a Member’s Register of interests should be clear, comprehensive and unambiguous, may I request that Cllr Stansfeld completes the information about this company so that council taxpayers may have a full knowledge of the interests of their councillors. I am sure that this is a matter that can be quickly resolved.
May I also request, through you, that Cllr Stansfeld may wish to adjust his LinkedIn record which shows him as Chairman of a company called Prescience, Switzerland based in Reading (see attached). Unless of course, he is Chairman of this company as well as FIDAS. In which case he will wish to add it to his register of interests, I assume.
My interest in all of this stems from Cllr Stansfeld’s selection as the Conservative candidate for the forthcoming election for the Thames Valley Police & Crime Commissioner.
Many thanks
Very best wishes

I am looking forward to the response... (part two of this story is above)
Posted by Jon Harvey at Tuesday, July 03, 2012