Child Sexual Abuse: have we all been duped?

I thought the House of Commons statement from the Home Secretary Theresa May and the ensuing debate yesterday was an example of Parliament at its best. This was an intelligent and constructive debate, with a couple of exceptions, there was no rancour or point scoring.

The Home Secretary took on board most of what was being suggested and paid due acknowledgment to the 'relentless' work of Tom Watson. As was commented on twitter by Jim Gamble (and he knows a thing or two about child abuse), the devil will be the detail. Who gets to be appointed to chair the wide ranging inquiry is a critical appointment and one that will be very closely scrutinised, not least because Ms May said she would heed the Chair's views about whether the inquiry should become a full scale public inquiry or not.

But much of this is for the future. Meanwhile, I earnestly hope that there could be more occasions like this in Parliament: in the sense of having a reasoned debate, courteous language, an absence of barracking and a search for the best way forward. If we collectively owe anything to the victims of child abuse, it is that we conduct a full and fair investigation into what has happened and how it was allowed to happen...

And this brings me to the main subject of this blog post: I think we have all been duped into believing that only utilitarian ethics matter. In other words the consequences of an action are what determine whether that action is good or bad. We appear to have forgotten that some actions are just plain bad. Period.

As regular readers of this blog will know, I spend some of my time going into primary schools on behalf of the ChildLine Schools Service* to talk about abuse and how children can get help. We do a half hour assembly first followed up a more interactive workshop in class groups a week or two later (all for years 5 & 6 only). The materials and script have all been designed very carefully to be age appropriate and educational, as you would expect from the NSPCC. One slide we use is this (Buddy is our mascot by the way!): 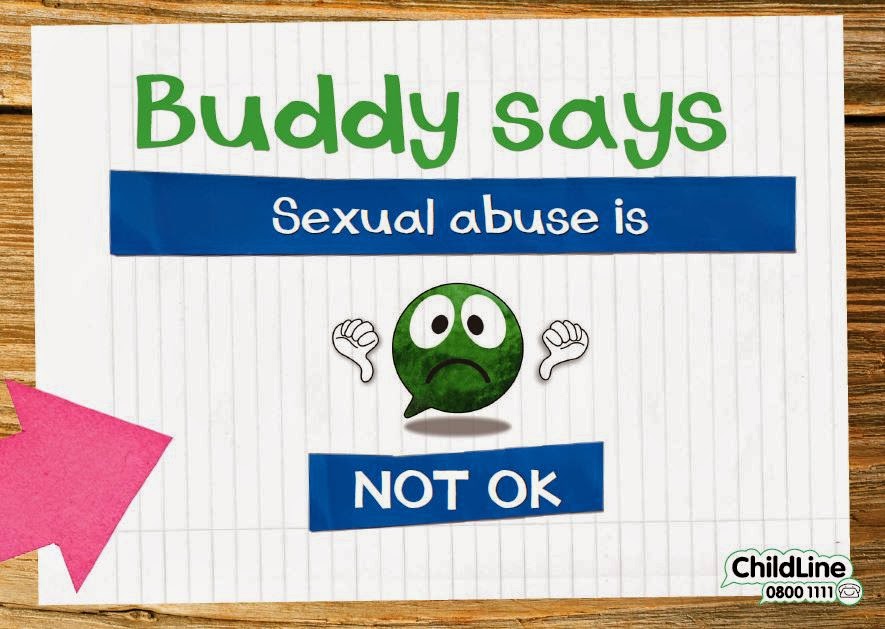 It is a simple straight forward message: Sexual abuse is not OK.

In our post industrial, post modernist, post ecclesiastical age, have we lost sight of the difference between
Have we all been duped into believing that the 'greater good' is the only arbiter of what is right and wrong? In the depths of the institutions now about to be investigated (BBC, NHS, Westminster, the Church and all religious bodies, the Military, the Security Services, the Police etc), have utilitarian calculations been made that have left victims of child sexual abuse living lives of raw hell because the 'greater good' was served by keeping matters secret? I think we all know the answer to that question. What I hope we find out is the scale.

I also hope that the perpetrators are all brought to justice and their collaborators (active and passive) likewise. And in this way, I hope that many, perhaps most, of the victims find some solace and a way of living with their pasts that is less painful.

I hope that the two inquiries now initiated go some way to exploring how we may all have played a part in creating the ethical milieu in which some wrong actions are covered up or excused because of the consequences of challenging them.

In my view, an exclusively utilitarian or consequentialist ethical framework falls far short of what we need in a civil society.


*If you would like to volunteer for the ChildLine Schools Service, please go to this link. New volunteers are always needed.
Posted by Jon Harvey at Tuesday, July 08, 2014