The Police & Crime Panel today decided that there should be an independent audit of the two offices / expenses matters that has been "distracting" the PCC over recent days. This is a good decision, and I look forward to the outcome. (For the record, if you are the auditor hired to carry out this task reading this, I would be happy to help!)

But what emerged today from the meeting makes interesting reading, I think.

(I qualify what I am about to report with a warning note: it may not be 100% accurate. Unfortunately the meeting was held in a committee room without a public address system or induction loop. So my colleague Roy and I found it pretty hard to hear all of what was being said. I would add that the only two people who we could hear crystal clearly were the Chief and Deputy Chief Constables who spoke clearly and with great, wise authority. I hope the next time the PCP meets in public session they do so in a place with a proper sound system.)

Mr Stansfeld said that he was not a young man and getting around Thames Valley, locating car parks in strange places and doing over 600 miles in a week meant he was getting very tired. His driver will help with all that and take notes at meetings for him too. And Thames Valley is the biggest non metropolitan police force, he said.

The Chief Executive of the Office of the Police Commissioner reported that on investigation and with assistance from specialist advisers, they have now discovered that the expenses being charged did not quite comply with HMRC rules. (Avid readers will know that I specifically raised this before and was told that the expenses regime did comply.) Mr Stansfeld also stated (and the Chief Exec concurred) that he delegated the task of doing his expenses to his staff. On questioning, he was not sure how many times he had visited the Hungerford office.

There is more to say about the meeting this morning but this blog is already long enough. And wine calls! Although as a Chauffeur, I suppose I ought to be drinking whisky with my driving gloves on...

Meanwhile, please enjoy my few minutes of fame on the local news tonight! Click here. 3 minutes and 16 seconds in... yours truly! 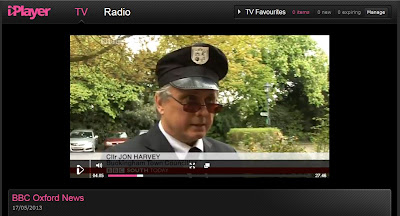