I hardly know where to begin to report on my day out to the Thames Valley Police & Crime Panel which met at West Oxfordshire District Council Offices in Witney this morning. I went in character: 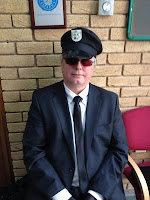 (Due thanks to my friend, colleague and fellow councillor @RoyBailey who took the picture.) And also I would like very much like to thank the staff of the council who offered me cups of tea and somewhere more comfortable to wait. I was too focused on my method acting to be able to say I wasn't really a proper chauffeur... (So, my apologies for fooling you, if you are reading this. You were not the subject of my asymmetric campaigning.)

Various other people arrived of course, I wished them good morning and directed them towards the meeting rooms, as a chauffeur would, of course. It was good to be able to welcome Councillor Pam Pearce from Aylesbury Vale District Council although I don't think she recognised me. I know that the Chief Constable did not when she arrived.

However, Mr Stansfeld looked at me closely, as I wished him good morning, and said "pathetic!" I smiled and wished him good morning once more. He then growled something like "I will be following all this up, you know". My pulse quickened and I felt a little threatened. I don't know exactly what he did say as a consequence, but the BBC Radio Oxford reporter who standing behind him at the time made a note of his precise words, however. My colleague Roy was also present, of course.

Indeed the reporter has already filed one story. I believe there will be more on BBC Oxford this evening at around 1830. Please watch that space... (I was interviewed on camera as well).

This is the first of a couple of blogs based on today. I will end this one with the press statement I gave out to the BBC reporter and the Oxford Mail reporter who attended the meeting. (I took a few copies along)
________________ 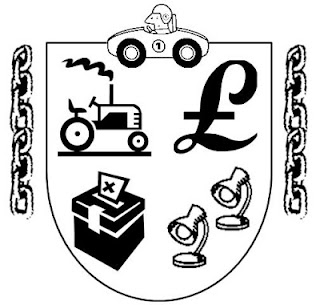 I am attending this meeting today in the hope that I will witness the PCP holding the Thames Valley Police & Crime Commissioner to robust public account.

In the last few weeks it has become very apparent that the PCC has been exploring novel ways to increase his productivity which include setting up a second office in Hungerford Police Station and hiring a chauffeur. News of these new arrangements has been covered in the national papers. I first blogged about his Hungerford office on Saturday May 4th (http://ajustfuture.blogspot.co.uk/2013/05/anthony-stansfeld-tale-of-two-offices.html)

Less well known is the statement the PCC issued on Tuesday 14th May about the Bullfinch trial where he says “The system was looking the other way while these young girls were being exploited and abused. We have a rulebook in which apparently the human rights of these young children are considered more important than safe guarding them. Under the current rules it is almost impossible to safeguard these children whose human rights allow them to go endlessly missing or absent from their care homes.” The implication is that human rights were one of the causes of the young girls getting abused. This is very controversial and highly questionable. Arguably, I would also contend that the whole statement comes very close (if not actually) to blaming the victims for bringing this on themselves by running away so much… These are matters worthy of investigation by the PCP.

In this whole context, the PCC governance model is under great scrutiny. The job of the PCP is to hold the PCC to account. Will they ask such questions as:
Notes:

He runs a blog which has been visited over 45,000 times in the last year or so (ajustfuture.blogspot.co.uk). The blog exists to provoke debate about PCCs and provide ideas on how to make the governance model work best in the interest of the public.

He has come dressed as a mock chauffeur to raise wry smiles and draw attention to the amount of money the PCC is spending on his own driver in these very austere times.

The crest on his hat, shown above, is designed to highlight:
(Perhaps the PCC may wish to adopt this crest: it is not copyrighted.) 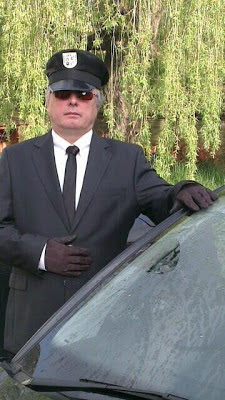