If I could hire myself I would charge a lot more

The title is a memorable quote from The Oxford Mail's interview with Anthony Stansfeld, published today entitled:


The full quote is:


“I am extremely good value for money. If I could hire myself I would charge a lot more.”

You must read the whole article. Well done to Tom Jennings for scooping this interview after yesterday's Mail on Sunday article. You, dear reader. will judge whether PCC Stansfeld's response is one that convinces you of his unimpeachable intentions. The commentators at the bottom of the page of Oxford Mail's article seem less than persuaded it seems. But perhaps you will be.

However, before you make up your mind, please ask yourself these questions:
I could go on... as indeed I think this story is set to....

PS: forgot to add - I spotted this on the Oxford Mail website earlier ...did they choose the advert...?! 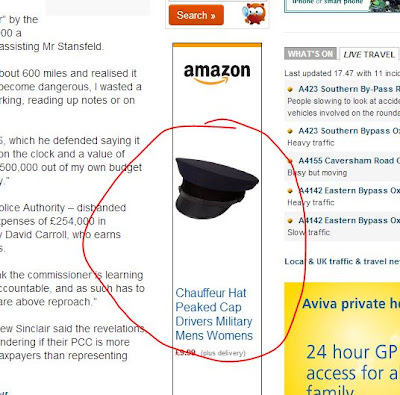