It is difficult for me to put into words quite how disgusted & despairing I feel over UKIP's campaign in the South Yorkshire for their PCC candidate.

I am disgusted that they have shamelessly further exploited young and vulnerable people by wrapping them namelessly into their political campaign. The irony that they feel able to criticise Michael Fallon for using the word 'swamped' (Ukip also accused Fallon of resorting to “intemperate language) whilst doing this, leaves me aghast. And also here is a party that has just joined forces with a Polish MEP (in order to save their EU funding arrangements) whose party has, at the very least, some extraordinarily 'dodgy' views on the Holocaust and violence against women.

And I despair that this viciously, vacuous and vindictive campaign could win them a substantial number of votes. After all, precisely what policies are UKIP promoting in order to tackle Child Sexual Exploitation, not just in Rotherham and Sheffield, but also in other afflicted areas like Oxford and Aylesbury? None is the answer apart from (as they might see it) banning political correctness... 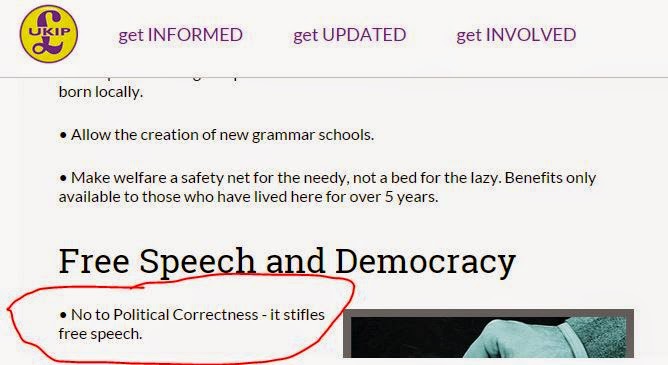 And of course, since UKIP is an irony free zone, they would not be able to see why 'free speech' includes using, if one wishes, politically correct language. Or as one illustrious Guardian letter writer (Allan Jones) put it, after Mike Read withdrew his Calypso from sale, isn't this a question of 'Political madness gone correct'...

But back to South Yorkshire, I much prefer this poster as devised by Michael Abberton

I sincerely hope that good governance prevails and a person worthy of the position is elected to become the Police & Crime Commissioner for South Yorkshire. Let's see what democratic result emerges...
Posted by Jon Harvey at Monday, October 27, 2014