The reasons why UKIP lost the South Yorkshire PCC election

Alan Billings, the Labour candidate has just won the South Yorkshire PCC election which was triggered by the resignation of the previous Labour PCC over the Rotherham scandal. I suspect that UKIP genuinely thought they would win this election.

However, Labour won on (just) 50.2% of first preference votes, I believe. In 2012, very few PCC elections were won without the count going to second preferences (where more than two people stood). Therefore, given the circumstances, this is a significant Labour victory. (I know that I feared that UKIP would snatch this election given the febrile context.)

From the tweets I have seen, I suspect that UKIP campaigners and supporters are aghast and disappointed, to put it mildly. They must be wondering how come they lost. Allow me to suggest why:

Lesson one: you have to respect your electorate. I have just seen this despicable tweet which leaves me worried, very worried: 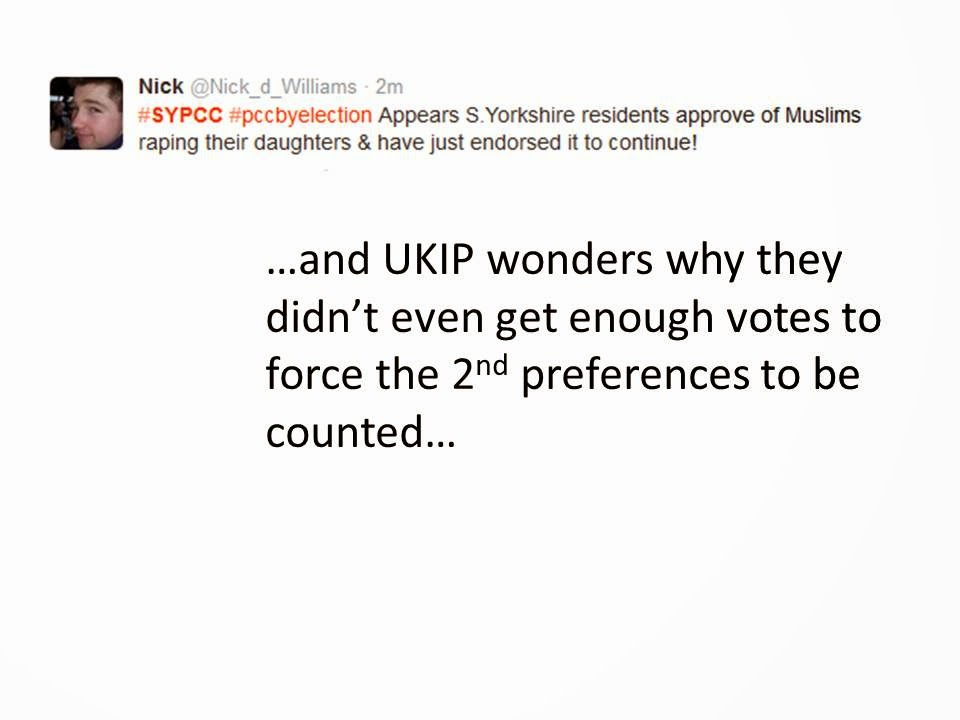 If this is the mindset of UKIP supporters, they are not going to do very well. Are there now any UKIP supporters who are Muslim? This tweet effectively says that if you voted Labour, you are morally equivalent to a child rapist. Nice.

Lesson two: invoke & add to the suffering of people who have been abused at your peril. As an earlier post of mine highlighted, campaigning on the basis of '1400 reasons to vote UKIP' is going to upset many people, and, guess what, these people have votes to cast. Such a campaign might just rouse your supporters but it is unlikely to gain more.

Lesson three: have something positive to say. The UKIP campaign was almost entirely negative. The fact is they have nothing to offer as a way forward from the growing scandals of Rotherham, Sheffield, Manchester, Oxford, Aylesbury (and wherever next...) Their only vaguely relevant policy is to ban political correctness... so how is that going to work or make a difference then??

Lesson four: don't ignore all the other issues. Despite what UKIP wanted this election to be all about, it wasn't. The investigations into Orgreave and Hillsborough were high profile as well. As indeed is how to make policing even better / communities even safer in South Yorkshire. UKIP might like to think they can shape the agenda but actually it is the electorate who do so...

Lesson five: police officers do not necessarily make good police commissioners. UKIP made much of the experience of their candidate. Obviously. But voters are not stupid: they know it takes more to be a good PCC than being a police inspector 8 or 9 years ago.

Which brings me to Lesson six: don't underestimate the electorate! The UKIP campaign was an object lesson in saying "well, I wouldn't start from here" when asked for directions to somewhere. UKIP might like to think they are men and women of the people but this result shows that to be not the case.

UKIP mounted a nasty, divisive and ignorant campaign. The electorate have shown UKIP that they are not like that.