I saw this couple of tweets this morning and felt driven to investigate: 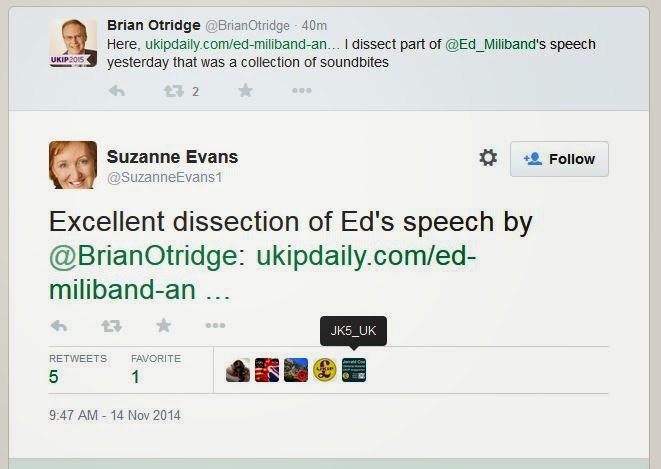 Mr Otteridge is the UKIP parliamentary candidate for Southend West (who I imagine is gleefully looking forward to May next year when I expect he hopes to 'do a Clacton'). Ms Evans is the UKIP Deputy Chairman (none of this PC rubbish about Chair or Chairwoman of course!) and UKIP candidate for Shrewsbury & Atcham. So, two serious and I imagine leading lights in the party. I was interested to read this surgical analysis of Ed Miliband's speech...

You can read his whole blog here. I won't go through it line by line (I have a noisy cat to feed and indeed, I find if I read all of what UKIPpers write, I get a bit a headache...) But here are some choice bits for you to chew on...:

Mr O says (for example) Let’s dissect this sound-bite by sound-bite: “And above all Britain only succeeds when working people succeed”

Correct, but what contribution has Labour made to that? With their combination of Tax Credits and high benefits payments, there is precious little incentive to rise from being unemployed to low-paid work, thus starting up the ladder to success. Instead, they encouraged the import of cheap overseas labour, either willing to work, or willing to join the queue claiming benefits.

So the implication of this is that UKIP would do away with Tax Credits in order to incentivise people to rise from being unemployed to low paid work...

First thing is, you only get Working Tax Credit if you are working.. (Here is a helpful link for Mr O) The clue is in the name. You can get Child Tax Credit if you are not working although it goes down if a person starts working. The whole point of the tax credit system is to tackle the poverty trap whereby people on benefits, used to immediately lose all those benefits on finding work. Tax credits seek to 'feather' the transition from unemployment to employment in such as way as indeed to encourage people to work. So Mr O needs to say a) what precisely is wrong with the current tax credit system (set to be replaced by the Universal Credit system in 2017 - maybe) and b) what UKIP would do in its place? Or would they do away with all forms of income benefits so as to encourage people into (as he candidly puts it) low paid work? Any chance of a policy here? All we have been told so far is "UKIP supports a simplified, streamlined welfare system and a benefit cap". And that is it...

As for the second part of his 'analysis' about encouraging the import of cheap overseas labour, this is standard UKIP flim flam. What they seem to forget is that the EU is founded on the principle of the free movement of labour and business around the common market. No encouragement required.

But let's move on to the next slice of Miliband to be shown the UKIP knife:

What about them? Are they good, or to be despised and destroyed? Methinks that Labour would rather them destroyed.  The mass immigration that they started, and showing few signs abating, is rapidly diluting those values. Never forget that they wanted to “rub our noses in diversity”.

So here Mr O just creates a straw man: "methinks" etc. The "mass immigration they started" - when was that then? Was that before or after we voted to remain in the Common Market in 1975 (67% voted YES to "Do you think the UK should stay in the European Community (Common Market)?") or are we going back to after the WW2 when all those West Indians came over to the UK on the Windrush? Or some other unspecified time? Mr O, if you are going to do a dissection please can you be more specific otherwise people like me will say that you are just using soundbites and flim flam...

I am intrigued to know where the quote of “rub our noses in diversity” comes from. Is it just made up? Have quotation marks been added to make it appear somehow more authentic? Who said this, when and what was the context? Otherwise I will cite that famous quote "You can't trust UKIPpers, they just make everything up" said by someone important at some time, you know, you remember, don't you...?

OK, next bit. (The cat is getting louder though...)

So, do we achieve security by meddling in foreign countries with ill-thought out plans, to introduce unstable governments that are easily defeated by rag-bag collections of Islamic fighters, or do we take a more sanguine approach to ensuring security of the homeland and our key overseas interests. On that, Labour failed again, by ensuring that we have a lot of potential terrorists resident in the country, and protected from prosecution by Human Rights Laws that favour criminals and minorities, rather than the law-abiding majority.

I think Mr O might be forgetting that it was Ed Miliband and the Labour Party that effectively stopped this government marching into Syria. And, I would argue, changed US policy, as a consequence. This was the first time ever, that a sitting government had lost a vote to deploy troops (I think). Yes, you can keep harking back to the Iraq and Afghanistan expeditions, but I think you will find that one of the reasons why Ed beat David was because Ed was not involved in that decision to go to war in Iraq... This is not something to use against Ed.

And who does Mr O mean when he says that "we have a lot of potential terrorists". What do they look like? Does he know where they live? Has he told the police or the security services?

And as for "Human Rights Laws that favour criminals and minorities, rather than the law-abiding majority" where is his evidence of this? It is an idea that some on the Right love to wheel out but I am guessing if Mr O was imprisoned without trial, he would be first to want to claim his Human Rights. Again this is not dissection... this is more like trying to cut a rope with an old pair of scissors.

As usually happens when I seek to unpack UKIP propaganda, I begin to lose the will to live. I will do one more (the last) section:

“And a country succeeding together, not ripped apart”

Taking all the above together, it is obvious that Labour’s smoke and mirrors strategy worked for a while between 1997 and 2010. There was n world economic boom they rode on the crest of, and the full effects of mass immigration were not fully noticed. Then came the crash of 2008, then the truth beginning to emerge about the failures in Iraq and other overseas wars, and over-stretch of public services. Labour keep blaming the Tories for the last 4 years, and they have done little to exacerbate the problems, but Labour were the architects of the declining and ripped apart nation that we see today.

So Labour rode on the worldwide economic boom for which they did not have a hand in but somehow caused the worldwide crash of 2008 which created a "ripped apart nation". Hmm, no contradictions there then...

And two, Mr O needs to check the meaning of 'exacerbate'... Of course Labour have done little to exacerbate the problems - we don't want to make things even worse for the people of this country!!

Come on UKIP, surely you can do better than this?!
Posted by Jon Harvey at Friday, November 14, 2014