I don't think anyone can doubt Ann Barnes' deep and personal commitment to the people of Kent, her clear aim to meet their need for effective police services and indeed her respect for the officers and staff who provide those services. I would take a calculated guess, that lying on the editing suite's floor are several more minutes of Ann talking about her desire for everyone in Kent to feel and be safe.

But last night's programme was a slow train wreck. Actually, it wasn't even that slow: within the first sixty seconds we were shown Ann attempting to describe 'the onion' and the layers of policing tasks & priorities. The comparisons made to 'The Office' and 'Twenty Twelve' began here.

I will be interested to see whether any other PCC dares to put themselves forward for a similar documentary... Or perhaps, as I also tweeted:

I wonder what other PCCs will say about last night's programme. Bob Jones (West Mids PCC) has said he will and Matthew Ellis (Staffs PCC) already has: 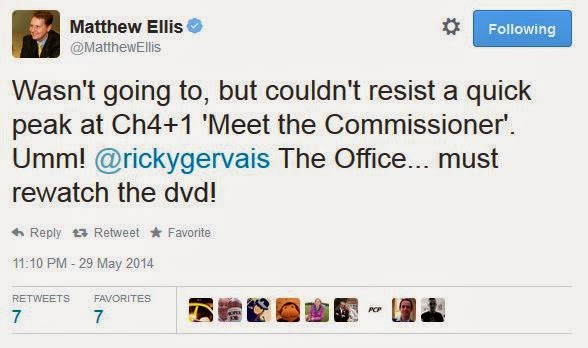 So what are the lessons to be learnt from all this? Here are mine:
Ann Barnes released a statement yesterday before the programme was screened. You can read it here and I ask that you do. I suspect that she will be driven to release further statements in coming days. These will deserve reading too.

There is some brilliant recovery to perform.
Posted by Jon Harvey at Friday, May 30, 2014