Last night at about 1800 I was driving home, turning off the A5 at the Old Stratford roundabout onto the A422. It is a roundabout I know well, with very clear lanes for which exit you intend to take. I was in the correct lane and just as I was about to exit the roundabout, a large white Mercedes 4x4 cut me up from the next lane, switching lanes and diving in front of me. I beeped my horn and flashed my lights to indicate to him that he had made a serious error (I had to brake quite hard to avoid hitting him). Here is a picture of the road in daylight (it was dark last night). I have tried to represent the position of the vehicles. Mine is the red one. (Thank you Google Streetview)

I was travelling at about 30mph I reckon. You might be wondering what the black cross is for. That is the position the man stopped his car to get out and shout at me, pointing at his indicator lights, as if him indicating as he switched lanes, gave him the right to cut me up...

I remained in my car, shouting "you cut me up - you were in the wrong lane!" though I am not sure he heard me... I should add that he had stopped very quickly, perhaps wanting me to hit his rear end. I did not and managed to brake (a second time) in safety.

If I had been a police officer, I expect I would have remembered his number plate accurately. All I can recall now is BU13 EHM, but I could well be wrong.

So this has got me wondering: should I buy a dash cam? What do you think? Are there any readers out there who have? What would you recommend? 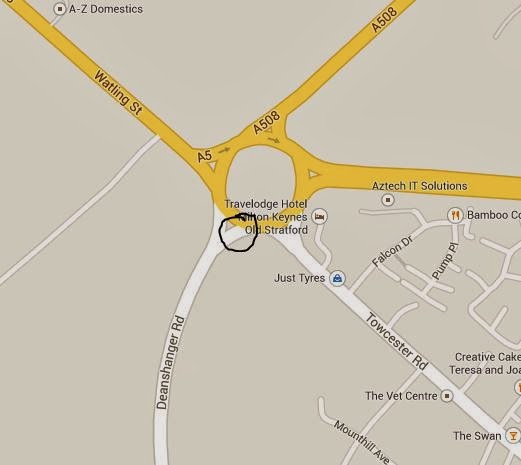