I hesitate to blog on this issue for number of reasons:
And then I come across this random selection of tweets this morning, which almost in a nutshell, sum up the diversity of opinion over the result of the inquest. 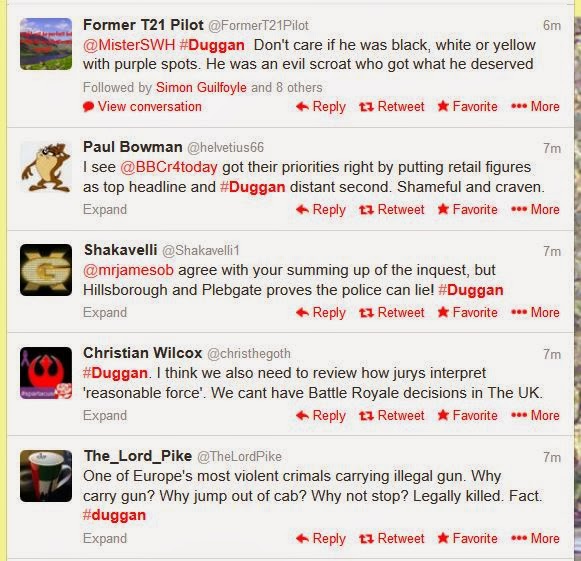 But in the spirit of this blog, I will ask what has been and what should be the role of the elected PCC for London in this matter? This of course is Mayor Boris Johnson supported by the Deputy Mayor Stephen Greenhalgh. What have they said about this? Should they have said more by now?

This is clearly an operational matter and perhaps the political leadership of the Met Police are staying mostly clear in order to allow the operational chief, Sir Bernard Hogan-Howe, to front the matter. I do not know.

Nonetheless, I think I would have expected more. If many people (perhaps hundreds, if not thousands) are expressing their great distrust in the police and/or their belief that the shooting of Mark Duggan is yet another example of institutional racism, then this is a huge political problem. And this is a problem that will not be solved by water cannons, hanging from zip wires or just setting up yet another task force. Some dedicated leadership from many quarters is required, not least from the Mayor and his Deputy.

I await to see what Mayor Johnson and Deputy Mayor Greenhalgh do next...
Posted by Jon Harvey at Thursday, January 09, 2014