Aylesbury Vale CCG: is this what the NHS has come to now?

One of the most controversial changes that the current government has introduced is the top down restructuring of the NHS. It remains controversial because before the 2010 election the Conservatives repeatedly promised “no more top down reorganisations” of the NHS. David Cameron said that "With the Conservatives there will be no more of the tiresome, meddlesome, top-down re-structures that have dominated the last decade of the NHS". (Ref) It continues to be controversial as the very real threat of the NHS being Balkanised into a series of privatised units appears to be slowly but inexorably happening. (See here and here for example)

So here we are now, almost a year into the some of the most radical changes the NHS has ever undergone.

Locally, this has meant the Aylesbury Vale Clinical Commissioning Group taking over the role previously held by the Primary Care Trust (broadly speaking). The AVCCG will be buying health care services on behalf of us all. I blogged about their conflicts of interest in some detail 10 months ago. Having taken that blog as a report to the Town Council, we then wrote to the CCG about our concerns. Buckinghamshire County Council also became involved and Louise Patten the Chief Officer of the CCG wrote a long and considered letter on 26 June 2013 to Cllr Lin Hazell (the Town Council was copied in). The quotes below come from that letter.

Ms Patten said that their Conflicts of Interest Policy was “being reviewed as a matter of urgency”. The new policy can be found here and it would appear that this indeed has happened.

In my previous blog I highlighted this particular statement:


If the withdrawal of a CCG member has the effect of rendering the meeting in question inquorate, the chair reserves the right to adjourn and reconvene the meeting when appropriate membership can be ensured.

This has now been strengthened and now reads:


Loss of quorum - If the withdrawal of a CCG member results in the loss of quorum of the meeting, the item cannot be decided upon at that meeting. The meeting should be reconvened when appropriate quorum can be ensured.

There is more of course. But this is certainly tighter than before. This is good.

However, I remain concerned about the overlap of interests between the AVCCG and the ‘for profit’ local supplier called Vale Health (description here). In Ms Patten's letter, she said “Both Dr Jackson and Dr West felt their position as shareholders of Vale Health was not tenable with their position on the Governing Body in terms of conflicted interest and both members resigned their shareholding in April and May 2013 respectively”. She went onto to say “Neither member has any ongoing interest in the company, nor in any other company perceived to be conflicted”.

This is another matter I highlighted in my blog from March last year as well. So that is all OK then…? Well probably but I am confused by the latest document held by Companies House which details the shareholders in Vale Health. The date of return is 18/5/13 and it was filed in electronic format on 1/8/13. 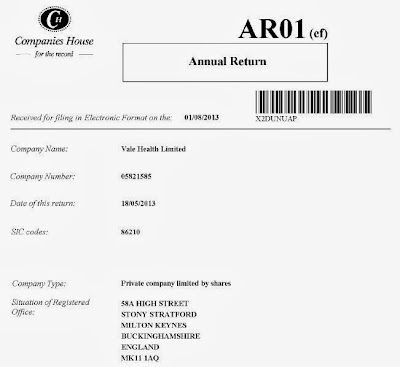 It is all the more confusing still since the button on the website that would take readers to the list of all declared interests (as at the time of writing: 1600 on 3/1/14) does not work. Perhaps this might be fixed too, given that the CCG has been officially live since April last year. (As an aside, I would also highlight that none of the buttons on the “How are we doing” webpage work either. The website proudly says:

In this section we’ll be keeping our performance reports and other benchmarking material, as well as keeping you abreast of the wider-scale state of the work of the CCG. We will use this information to measure how we are maintaining or improving the health outcomes and service standards delivered for our population

… but try clicking on “Performance Reports” or “National & Local Standards” and nothing happens. Could the public have this data made accessible sometime, perhaps?)

But to return to the issue of conflicts of interest. The AVCCG site lists all the members of their Executive Team. Here is the list:
You may be wondering about the numbers in brackets. Or of course, you may well have worked out that these Executive Team members are also listed as shareholders of Vale Health on the Companies House document. The numbers are their allotted shares.

I don’t know about you, but this does not leave me feeling particularly comfortable. Nine out of fourteen members of the commissioning body’s executive team have a financial interest in one of the agencies that they could be commissioning in the future.
____________

Email ThisBlogThis!Share to TwitterShare to FacebookShare to Pinterest
Labels: AVCCG