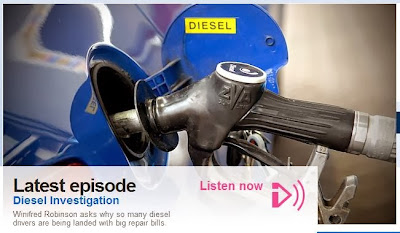 Following my appearance on BBC You & Yours last week, I was featured on this week's Wednesday programme as well to accompany further research by the Y&Y team (specifically Kevin Core)

It is emerging that perhaps bio-diesel could be the source of the problem although it is still unclear. Apparently the RAC have helped over 600 drivers with this 'waxing' problem in November alone. You can read the BBC blog which has some more detail here.

It would seem that Department of Transport and the fuel industry have been working on this problem for the last few months. But...
So if you have experienced this, please let You and Yours know so that we can keep public attention on this problem. My hunch is that the industry and government need some nudging to get this problem solved very soon. The next few months are going to be colder and there will be more drivers suffering. And the problem has been known about for quite some time by both the industry and trading standards...

Do we have to wait until a driver or passenger is seriously injured before speedier and effective action is taken?

It seems as if this story is growing. I have spoken today to Radio 5 Live, the RAC and the Sunday Times. Indeed (if you are not already bored with listening to me on the radio), I will be on tomorrow night live on Radio 5 at around 21.45

But the thought has struck me: if the agencies involved in the research (and that includes the industry, government, RAC, trading standards, the Society of Motor Manufacturers and probably the AA too among others) had gone public with this a few months ago more data could have been gathered and possibly the pattern could have been spotted sooner than now... a bit of breakdown / repair epidemiology as it were.

Why has it all been kept hush hush?
Posted by Jon Harvey at Thursday, December 12, 2013