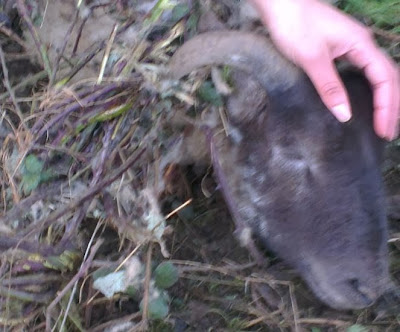 Yesterday, I helped rescue a sheep.

My wife and I were out for a walk across the fields near where we live and happened across a distressed sheep that had got tangled in some bracken. Wool and brambles do not mix well. And we were both very concerned that the sheep could be slowly throttling him (? there were horns...) self.

But what to do? We did not know who owned the sheep nor the farmer whose field it was. So I dialled 999 and sought help from the police service, hoping they would be able to spare the resource to assist. Or at least put us onto someone who could.

Within about 25 minutes a constable and PCSO turned up in a liveried covered pickup van. Having established that the nearby farmer did not own the sheep and one who did was not answering his mobile, the four of us pondered what to do next. There was only one solution: free the sheep.

But we needed some tools. Now I assumed the back of the truck would be police equivalent of the Thunderbird 2 hanger: it was nearly as big (as the Gerry Anderson set).

However, apart from a few traffic cones and some fluorescent jackets, there was not much. Certainly nothing in a way of a saw or even a Swiss army knife. The officer quipped that they weren't allowed to carry offensive weapons!

But improvisation and the 'can do' attitude of the police saved the day and it is amazing what can be achieved with a seat belt cutter. The police officer sliced through the strands of foliage one at a time and the sheep was released. Once he 'found its feet' again, he (she?) ran off with half a bush attached to his shoulder. The PCSO phoned the farmer again who this time answered the call and she gave him an update.

So what did I learn (or was reminded of) from this incident:
So may I wish all who work in and with the police (and all emergency services) a very Merry Christmas and a Happy New Year. While most of us will be tucking into sprouts, watching the Queen and enjoying the Dr Who & Downton Abbey specials: there will be police officers and staff, firefighters and ambulance crews waiting for the next job to do.

Thank you to all of them (and their families who have their festivities on another day).
Posted by Jon Harvey at Monday, December 23, 2013