I have been browsing through the Home Affairs Committee: Written evidence Police and Crime Commissioners: Progress to date document. As you do... (Thanks to Martin Beckford and Mark Ryan for highlighting this tome for me.)

In it, the PCC for Thames Valley states (in talking about the role of police and crime panels in holding their commissioners to account):


8. First, may I point out that police and crime panels do not have a statutory responsibility to hold commissioners to account. The Home Secretary has made it clear that it is the electorate, through the ballot box, who holds their commissioner to account.

Through the ballot box...? Hmm.

So how does this work? I note this past story in a local newspaper: 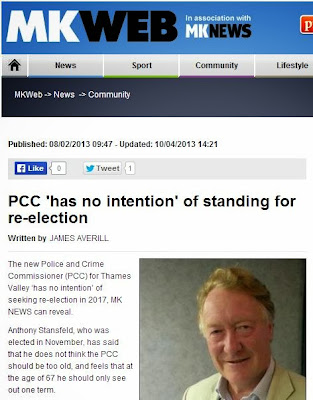 To quote the article:


Anthony Stansfeld, who was elected in November, has said that he does not think the PCC should be too old, and feels that at the age of 67 he should only see out one term. “At the moment I have no intention of running again,” he said.

So, let me get this correct: a PCC who has publicly stated that he has no intention of running again due to his age has also stated that it is the electorate that holds him to account at the ballot box.

How does that work then?

I would argue that public accountability is about far more than a once in a while election. It is about working in partnership with the Panel and accepting their role as one of proper challenge, not only to decisions after they have been made but also towards plans for a start. Mr Stansfeld says:

Finally, where there has been tension between the Panel and myself, it has usually involved the following.... The Panel seeking to extend its role and remit beyond its statutory duties and responsibilities, e.g. attempting to scrutinise my intentions, rather than my decisions and actions, and effectively seeking to act as a consultative body with a view to approving or endorsing my proposals prior to my taking decisions.

How very dare they do this!!

And of course, public accountability is about far more than this.

But have a read through what Mr Stansfeld says in his submission to the Parliamentary Committee (his piece is on page 76). What do you think?

Here is a 'wordle' word cloud of his submission: