The Daily Mail gets into 'rant' mode so easily (especially the people who add their antediluvian comments), they really ought to print it in purple ink. A colleague and friend sent me this clipping the other day:

Police 'rewarding' shoplifters with food vouchers after they are caught stealing


Shoplifters caught stealing are being released by police and handed free food vouchers. Officers across the country have been issued with the vouchers that allow criminals to collect three days’ supply of provisions donated to food banks. Some shoplifters claim that they had no choice but to turn to crime to feed themselves or their families. But critics have said giving vouchers to offenders rewards thieves at the expense of law-abiding citizens...

Seven (7) vouchers have been handed out by Staffordshire Police so far under this scheme. The most recent case, it is reported, was of a man who spent his benefits on a vet's bill for treating his dog, stole some food and then handed himself in. However...


the scheme was suspended in Staffordshire last night after local Police and Crime Commissioner Matthew Ellis ordered a review. He said it was ‘absolutely not acceptable that criminals should appear to be rewarded’. Mr Ellis added: ‘It’s not the case in this situation but that’s what it looks like it and that’s something I can’t tolerate.

I think what intrigues me most about this story is that the Daily Mail bothered to put 'rewarding' in quotation marks. Does the author (John Stevens) have some sympathy with this scheme I wonder?

But what worries me most is that the PCC appears to have the power to suspend such a scheme. Assuming the report is correct, since when did a PCC have the authority to stop an aspect of operational practice? I am curious... Perhaps Mr Ellis would like to confirm what happened? I have read his blog and it is not clear what exactly he has done... Did he instruct the Chief Constable to stop the scheme and review it? On what basis will it be reviewed?


"On the few occasions where these vouchers have been given out my understanding is that people have been arrested for stealing food and they are in very straitened times. In order to encourage them not to offend in the future they have been given access to food banks." A Staffordshire Police spokesperson said: "These were some of the most hard pressed individuals that our officers had seen and they used their professional judgement to give them food vouchers provided by a local charity."

But in the end, isn't tackling and preventing crime about what works? I am pretty sure that the local police would take a different stance if someone kept stealing food and rocked up at the police station demanding another voucher. So I think, we can trust police officers to use their common sense and act in ways that are not only compassionate but also effective at stopping crime in the future.

But meanwhile, I look forward to hearing about the review and its results.

I would also have liked to have been a fly on the wall when the PCC asked / told / hinted obliquely (??) that Chief Constable should have the scheme suspended and reviewed.

I have just been tweeting this blog post and, of course, tweeted the main protagonists. The Chief Constable came back in flash: 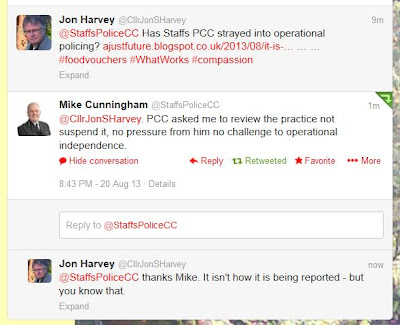 A very creditable and worthy response. I can relax. No infringement of operational policing. But I do wonder about all the reporting though. How could this be?

For example a BBC news story says this:


Staffordshire PCC Matthew Ellis, said it was "absolutely not acceptable" for it to appear criminals were being rewarded for stealing. He said he had suspended the scheme immediately and ordered a review.

(My added highlight) The BBC, the PCC and the CC cannot all be correct... What do you think?
Posted by Jon Harvey at Tuesday, August 20, 2013