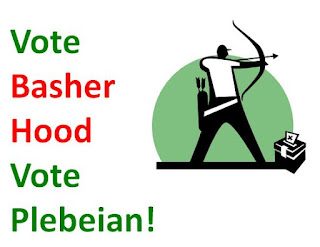 A script for a new campaign video has fallen into my hands. I thought people might like to read it...


Hallo, my name is Basher Hood and I am seeking your vote to become the Police & Crime Commissioner for Forestshire. I am not usually that political but the Plebeian Party approached me with an offer I couldn’t refuse. I know a lot about crime and punishment, far more that all these magistrates, councillors, barristers and authors (including that Dostoevsky bloke) who are all banging on about becoming PCCs. They don’t breath the same air as we Plebeians do. I have been there, been done in and stolen the t-shirt.

Mind you, I have never been convicted of an imprisonable offence, not even in my youth, as some of the would-have-been candidates. No. I have been in a custody suite, sat in the back of police car, watched friends get put away… but no court in the land has ever found me guilty of an offence. I have, to use the vernacular, got away with it.

This gives me a rare and precious insight into the workings of the police and other crime bodies. Police officers have stared into my baby blue eyes and I have stared back. They don’t intimidate me but I would never, ever swear at a police officer: I am not so stupid. Moreover, I see them as part of the rich flora and fauna of my business environment. The police often appear as both threats and opportunities on my annual SWOT analysis of my business.

So why should you vote for me? Like I say, I have been on the inside for all of my life. Politicians talk about budgets & police numbers: I experience them. I hear the coppers talking about the bits of kit they haven’t got, the overtime they can’t get and the leadership they would like to have. You would be surprised how much they tell me. (I don’t look down on them and they don’t look down on me.) I have watched these magistrates wrestle with their consciences and wring their hands when they come to sentence my friends and family. They think that gives them special understanding of crime. Trust me, it doesn’t, at least not from where I am standing. And most of the time, they just do what the court clerk says they can do.

No, the only way you get to understand policing and crime is if you experience it day in, day out. As I have done all of my life.

So vote for me and I will make sure that the police go where the real & harmful crime actually is and not where rarefied classes think it is. I will make the voice of the ‘plebs’ heard. Strange as it may seem, I want good policing and less crime. I know how much harm there is where I live and how much of it is not tackled because coppers are busy chasing the wrong people or writing long reports.

And do you know what the real harm is? Of course it is violence and pain that ordinary people suffer when they are mugged, burgled or beaten up by their partners. But let’s be clear, we in the Plebeian Party also see all the pain and anguish when people haven’t got enough to eat or give their kids proper shoes. This is violence too although this Government doesn’t see that.

So make sure you vote for me on November 15. If I become PCC, we will get a policing plan that reflects the map of harm in Forestshire. I won’t cow tow to anyone especially the Home Secretary or PM who I reckon, know about as much about real crime & policing as I know about hedge funds, offshore tax havens and the playing fields of Eton or Rugby. You won’t find me cycling to work, I will be getting the bus.

And above all, I will stand up for the people, the real people who suffer the real crime of being forgotten or looked down on by politicians of a certain ilk.

Email ThisBlogThis!Share to TwitterShare to FacebookShare to Pinterest
Labels: Humour