Making safety part of the fabric of communities

There are many factors which contribute towards the community safety of a place which include social mix, house and neighbourhood design, local leadership and the provision of open spaces for sport and recreation. Housing developers and the planning authorities that approve the overall designs bear a particular responsibility for creating safer communities right from the start.

As many will know, I am a Town Councillor in Buckingham, and along with my fellow councillors (and with the support of some very skilled officers) we have done all that we can to influence the design of a new housing estate (with 700 dwellings) that is being built on the edge of our town. The housing developers and local planning authority (Aylesbury Vale District Council) have listened to us... a bit, (although certainly less than we would have liked).

One of our our concerns has been to do everything possible to ensure a community connectivity between the new place and the established town, especially as there is a busy bypass acting as a barrier in between. Our desires for a footbridge and adequate bus service have so far fallen on deaf ears (although we remain hopeful).

One matter that has exercised us has been the naming of the streets and the overall estate. We think the names really matter and I was concerned that we did not end up with a mix of Acacia Avenues or a George Osborne Close (no through road)! And so I proposed that the street names should be linked to the industrial history of Buckingham and be based upon lace-making terms. My fellow councillors agreed and we obtained the support from the developers and the district council. The Royal Mail gave their consent (they will be the ones delivering post) and now soon there will be Needlepin Way and Cotton End etc.

But, where we did not get our way (initially) was in naming the estate as a whole. My proposal which was agreed by the planning committee was to call it 'Lace Hill'. However the developers chose 'Windsor Park' without consulting us and with the support of the County Council had signs erected to indicate this: 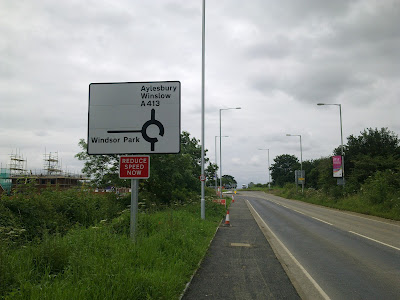 I was not happy. The Town Council was not happy! Prompted by a remark from the last year's Mayor (Cllr Mike Smith) and with the support of Cllr Robin Stuchbury (Town and District Councillor), I did a bit of research and found out that the name 'Windsor' is strictly controlled by the Cabinet Office and can be only used with their permission... And so I wrote to the Cabinet Office a few weeks ago.

The Cabinet Office wrote back yesterday to let me and Cllr Stuchbury know that the name would have to change: This department would only allow the use of the restricted word “Windsor” if the development is based in the Royal Borough of Windsor. You should approach your developer, ask whether they sought authorisation prior to the use of the name in their development/park and seek written evidence of this.

I have now written to the various organisations involved and I know that Cllr Stuchbury has been contacting others as well. We await developments... (as will Mix96, who just phoned me for an interview as I was writing this blog).
Posted by Jon Harvey at Wednesday, August 22, 2012