The NHS Pledge: standing up for Buckingham NHS

On Tuesday, I went to the Houses of Parliament on behalf of my District & Town Councillor colleague, Robin Stuchbury to be part of a rally to sign the pledge set to defend our local NHS.

I joined Labour MPs and Labour Councillors from all over the country at Westminster to officially launch the ‘NHS pledge’ - a five-point practical attempt to limit the damage of the NHS reorganisation. This means Robin, I will be working with all the Labour councillors on Buckingham Town Council and Aylesbury Town Council to act as patient champions and the last line of defence for Buckingham’s NHS.
We call on local health leaders to:

I will be asking our NHS Wellbeing board in Buckinghamshire to adopt the five principles to protect the NHS from the worst that David Cameron throws at it. Labour locally will not sit back and wait for things to go wrong in our NHS - it is far too important for that.

By joining forces we can resist the drive towards the rationing of treatment and the encroachment of charges we are starting to see in our NHS. The Tory-led Government’s NHS re-organisation is already causing real harm to patients and is wasting £27,757,281 in Bucks.


“I am very proud to be launching the NHS pledge in Parliament. It will be an invaluable way of showing how Labour Mayors and Labour Councils can make a positive difference to local health provision and defend the things that matter in our NHS.”

“People are particularly angry about what’s happening to our NHS and believe that David Cameron has betrayed them. Before the election he promised no more top-down NHS re-organisations but brought forward the biggest ever, taking £3.45bn away from the frontline and running unforgivable risks with patient safety. The NHS Pledge will show where Labour Councils are making a difference.” 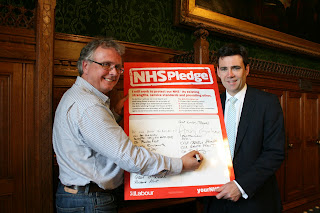