It's a form of addiction: do I need help?

I don't why I do it. It is probably a form of addiction. I feel less healthy as a result, certainly more tired. It can interfere with my work. If I am being honest, it is a compulsion I have suffered from for quite a long time, probably since my early teens. I suppose I could get treatment for it, but I have never even gone looking for such....

I really must stop getting involved in pointless debates with Tory tweeters (it used to be school chums when I was younger). Especially late at night. I genuinely don't know why I do it. I know deep down, they are not going to be persuaded. They probably know the same. Perhaps we are all trying to 'win on points' as there are rarely any knockout 'facts' that destroy the others' arguments (other than the ones we believe there are). And even a points win is pretty subjective. Actually no, it is totally subjective.

But why do I do this?

Perhaps I am kidding myself that this is giving me crucial insight into the Tory mind that will help me persuade others, whose political beliefs are less solid, of the worthiness of my left wing arguments for a fairer, better future (where everyone has ambitions and dreams, and the resources to achieve those ambitions and dreams).

Certainly last night's debate showed me very clearly (at least I think it did...) that the Tories will be fighting the next election on the basis of the economy. Their arguments will be that over the last five years that they have delivered more jobs, rising wages, better economic management (far better than Labour/Gordon Brown who sold off the gold and plunged the country in huge deficit yada yada) and so if you want to vote for a more prosperous future for all, vote Tory! (And also, you cannot trust Labour to run the NHS, look at the devastation in Wales where Labour runs the health service: people are suffering poor care. lots! And, look: even Labour MP, Ann Clwyd agrees!) The sources cited for all these 'facts' are numerous newspaper articles (by a wholly neutral, objective and independent press/media, of course) and references to dense ONS spreadsheets.

But I knew this anyway. I did not need last night's online debate to remind me that Tories will always argue on the basis of economics. And even now I am carrying on with the debate in my head, wishing, oh so wishing, I could locate some killer objective statistic that would decimate their arguments. Of course, I cannot. Not because they are right, but because it is all a darn sight more complicated than this. The tools of political warfare are headlines, sound bites and over simplifications. The actuality is always far more complicated than that. If I could locate a 'knockout stat' somewhere, no doubt my opponent would find another one to counter. And I would find another and so on. Then, suddenly, it's 3am in the morning.

So, I am making a resolution today. (And I can do this: my 5:2FO diet appears to be working - it is fruit only on 2 days a week and I am lighter than I was six weeks ago.) The next time I edge into such a online debate, I will challenge myself (and the others involved) to find out what we can agree on. And then leave it at that.

I will let you know how I get on. 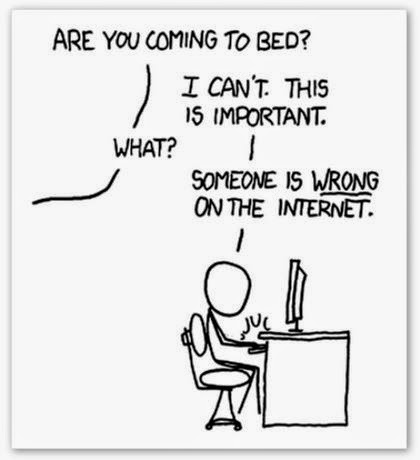 With thanks to @eredarP who gave me the link to this. I would acknowledge the author if I knew who it was... Brilliant!
Posted by Jon Harvey at Friday, April 04, 2014