Over the last few months I have been investigating the 51m alliance. I have been doing this ever since Cllr Martin Tett made a public commitment to reveal the full financial affairs of 51m at a public hustings in Aylesbury on 25 April this year.

I said to the assembled panel “Should the public be able to see easily where and on what the 51m group’s money (that’s our money) is being spent.” In response, Cllr Tett said very clearly “the breakdown of that I can make available” with no qualification about this being only the BCC slice nor indeed that this would be limited by merely complying with the law on disclosure. (The online recording by BBC Three Counties Radio of that meeting is no longer available but I am sure could be accessed if needs be.)

However, the breakdown has not been made available by him, so I have been using FoI to discover some interesting facts...

First here is a description of the group taken from their website:

’51m’ is an alliance of councils that has come together to challenge the evidence base about the HS2 project. They are known as “51m” because that represents how much HS2 will cost each and every Parliamentary Constituency…£51million

This is not the case. Some councils have paid nothing in while others have paid far more than most others. 19 councils are listed. The total sum donated/spent is £872,000 (rounded to nearest thousand). So of every council had donated an equal share, they would each have paid about £45,000. Here is the list of what they have actually contributed over the last two years of 51m's existence: 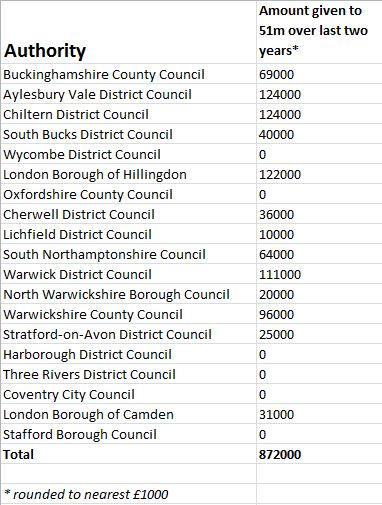 Six of the nineteen councils have contributed zero cash (ie taxpayers' money). Seven councils have contributed more than the 'average' of £45k. The taxpayers of Aylesbury Vale and Chiltern District Councils (which includes me) have paid the most since combining the District and County council contributions, we have paid more than anyone else. Buckinghamshire County Council (which Cllr Martin Tett leads) has contributed less than several smaller councils on the list.

I would have thought that at the very least, all the councils listed would have paid something... but it appears not. (In case you are wondering, I do have all the FoI emails validating this data. And also for the record, I am not a supporter of HS2 and I sincerely hope the next government will choose to spend the money allocated to it on more worthwhile projects.)

Now you may be wondering where has all this money been gone? I asked for spreadsheets for the 51m accounts from Buckinghamshire County Council, since they are the hosting organisation for the group. There are many sundry items which I am not going to list here. Instead, here are the two main payments made by the 51m group:

£103,562.50 has been paid to a Mr Stokes who was procured as an independent contractor (although you can see details about him here). His services have been described in correspondence to me as "Mr C J Stokes is a rail expert with 40 years of experience.  He provided technical expertise which enabled 51m to respond effectively to the 2011 HS2 Consultation, provided evidence to the Transport Select Committee Inquiry, developed 51m’s Optimised Alternative, was an expert witness during the Judicial Review, prepared letters and briefings, attended meetings, prepared maps, reviewed DfT business case information, prepared submissions to the Public Accounts Committee and National Audit Office and other technical work."

I asked how Mr Stokes was procured and I was told that his fee is below the OJEU level and no other tenders were sought. The procurement process was judged to be exempt from wider tendering on the basis of "urgency and expertise".

It would seem evident that Mr Stokes knows his stuff! However... what do the taxpayers of the contributing local authorities think about that amount of money being paid to a single individual without any competitive tendering, I wonder?

But a far bigger amount has been paid out:

£389,502.04 has been paid to Harrison Grant Solicitors. Although legal services are a ‘Part B’ service which means they are exempt from OJEU advertising, I asked about where the awarded contract was published. I was told "the contract was published on the South East Business Portal. The estimated value published was £130,000 at that time". So the contract has more than trebled since it was first let.

I did some more digging. I wanted to know how they were procured. I asked:

Where did you advertise the initial tender? How many organisations responded? Which other organisations were unsuccessful? By what specific criteria were the various bids appraised? What questions were the tenderers asked in the interview? Why have you chosen not to retender given that the initial contract was for £130k and is now three times that amount? What contract management arrangements are in hand?

Bevan Britten and Sharpe Pritchard were asked to tender as they are our external partner lawyers, following a full tendering process. Harrison Grant was also invited to tender at the request of the London Borough of Hillingdon. Each firm submitted an expression of interest.  The three bids were appraised by in-house legal teams against our request for expressions of interest.  No formal interviews were held. Retendering was not undertaken as continuity and knowledge of the case was important. Harrison Grant’s rates represented good value for money and an efficient and effective working relationship had been formed with 51m.  Harrison Grant worked closely with the Buckinghamshire County Council  Programme Manager. Costs were reviewed, estimates provided by Harrison Grant and all agreed with 51m partners at each stage of the project.

I have no experience of procuring legal support (except when I have sought help with house moving etc) but I do note this:
In your view, is this a good use of public money?

In my view, being the wizened old political hack that I am, HS2 will only be halted politically. The notion that it could be stopped in the courts was at best unlikely, and at worst plain daft. Throwing nearly £400k at a legal challenge was, in my opinion, a waste of taxpayers' money. This is money that could have been far better spent on more worthwhile projects. And I seriously question the political judgement of those who took this course.

Was this another vanity project sponsored by the local grandees to be at least seen to be doing something about HS2 but knowing that little would actually be achieved? Was this a way of out UKIPing UKIP? (Meanwhile, a firm of lawyers and a rail expert have done some rather good business.)

You pays your money: you can make up your own mind...
Posted by Jon Harvey at Tuesday, September 17, 2013