Nineteen or so years ago, the previous Conservative administration passed the Police and Magistrates’ Courts Act 1994 which introduced the now defunct police authorities and brought in the idea of Annual Policing Plans. In May 1995, I began my twelve years with the Office for Public Management.

One of the first ideas I had was to convene a series of workshops in the autumn with police authority members, police staff and police officers, involved in the process, to reflect upon the first year of policing plans and think about the next.

I produced a briefing paper based on the four workshops: Fitting Aspirations with Reality: Developing more effective annual policing plans which OPM have kindly agreed to allow me to republish. I thought their might be some lessons in there which are still valid... 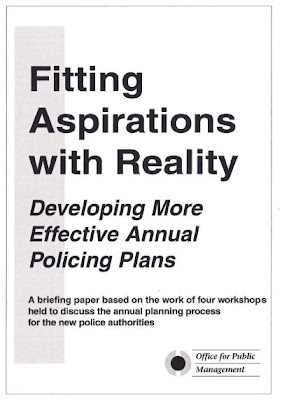 I have uploaded a scanned pdf to my google drive and you can access it here (not least for the list of people who came along - many of whom are still around in the policing world...)

The key points to emerge were:

The section headings include:
I won't summarise the whole document (do please read it), but here are the ingredients for successful public service planning drawn from the discussions at the workshops:
These points and many more are expanded on the document linked to this blog post.