Marooned in the neutral zone

Some weeks ago (17/5/12), I wrote to Thames Valley Police Authority about how they might take a role in organising some 'shell' hustings meetings for the Autumn. My idea was that once all the candidates were known, these meetings could be activated, leaving the Police Authority a neutral facilitator of good democracy. I received a reply today.

Specifically, here is what I wrote back in May:


May I request that a matter is considered by the Authority – or at least by the Executive Team – concerning the forthcoming PCC election in November. I know that detailed discussions are underway about the transition to this new governance structure. I am sure that all is being done with due diligence and care.

My hope and concern is that the PCC election itself will attract the widest possible engagement of the Thames Valley voting public. The predictions of voter turnout however are not very positive given not only the time of year, the low level of awareness, let alone understanding of this new position and the minimalist approach being taken by the Home Office (and as yet the Electoral Commission). I am not alone in worrying about this – other commentators have expressed serious concerns that a low turnout could benefit extremist candidates as well as damage the status of the new PCC. (You will have seen http://www.guardian.co.uk/uk/2012/may/15/police-commissioner-elections-voters-poll?newsfeed=true for example.) I would presume that this concerns PA members and officers similarly.

The PA is currently planning its own demise and members may (understandably) be thinking a little that this is ‘not really our problem’, as it were. Equally, there is a clear need for the PA to be totally impartial in the run up to the election in November.

Given all of the above, I have a proposal to make. May I request that some PA resources are used now to organise hustings meetings for October and November. I would suggest that meetings in at least Milton Keynes, Aylesbury, High Wycombe, Slough, Reading, Banbury and Oxford (as the major conurbations of the area) would greatly help to raise awareness and inform the voting public of the choice they will be able to make on 15 November. The media could also be alerted so that there is much reporting of the events as well. Perhaps the events might be chaired by notable independent residents of Thames Valley – perhaps journalists, academics or others with an appropriate profile. Of course the final list of candidates is not yet known. However, once you publish the dates and locations, all contenders (and journalists) could put the dates in their diaries now and be prepared to attend. In this way, you will be able to assure that there is no bias in who is invited to be on the panel.

The PA may say that this is not in their brief and it more properly rests with either the Home Office or the Electoral Commission. Legally speaking, it probably does. However, I am being pragmatic and recognising that neither bodies is likely to set to and organise such events across the country. Arguably the local newspapers / media channels could also do this (and indeed might be encouraged to sponsor one or more of the events) but in my opinion, TVPA is ideally placed to take the lead in the interests of supporting vibrant democracy.

I am not sure what is the best way to put this forward. In essence I am proposing this as an ordinary member of the Thames Valley public since our selection process in the Labour Party is still underway. However, if you wish, I would be happy to make a short statement at the PA meeting a week on Friday if that was appropriate. Equally, this email may be sufficient and I look forward to a response from the Executive Team. Or you may advise another pathway.

Whatever is best, I look forward to your thoughts. Many thanks and with very best wishes


Here is the reply: 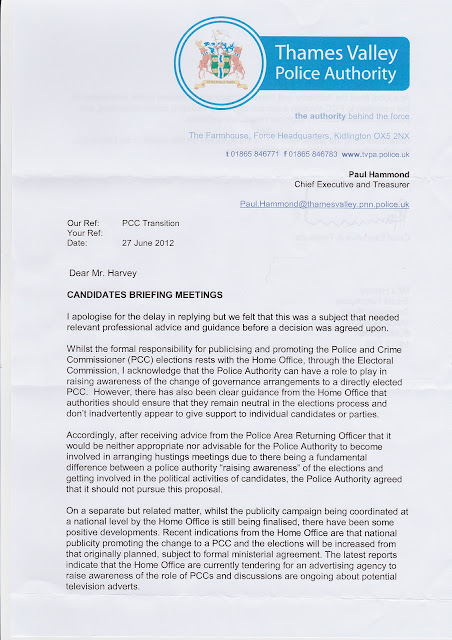 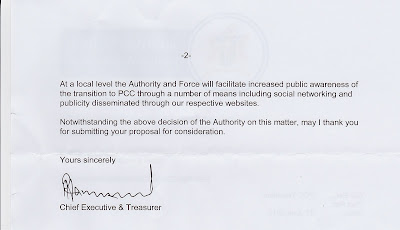 I am most grateful for the considered reply from Mr Hammond, the Chief Executive and Treasurer. However, the letter singularly fails to explain how organising meetings to which all candidates would be invited would mean sacrificing neutrality.

The letter goes on to say that there is a 'fundamental' difference between raising awareness and 'getting involved in the political activities of candidates'. Frankly, I don't think there is at a local level since once people are helped to be aware that an election is under way, their next question is likely to be: 'who is standing?'.

It is good that it would appear that the Home Office is grinding into some sort of action on publicity but I am not holding my breath. Television adverts horrify me and I sincerely hope the company hired are not the same ones doing publicity for Lancashire Police Authority...:


And the one thing I know about TV adverts is that they cost a great deal of money. I am sure there must be better ways of using that cash (such as leaflets to all households listing details of the candidates in each area maybe...?)

All of which leaves PCC candidates more or less in the same place. In my view someone, perhaps all candidates, need to be knocking on a few more doors, especially those of the local Police Area Returning Officers. They appear to have the decision making power.

And in case that does not work, I would also be talking to local papers, TV and radio channels now to try and persuade them to start sponsoring and organising hustings in Autumn.

In the meantime, I would recommend you stay close to @RosBaston who is producing some excellent materials & ideas on the legalities around the whole election process. Her 'PCC Poll Patrol' newsletters are very useful and this one has details about communication and election notices.
Posted by Jon Harvey at Thursday, June 28, 2012